Among women Brennan and Andersson completed the podium and among men Spitsov and Yakimushkin. Tomorrow 1:30 p.m.: Pursuit Classic Style on 10 and 15 km distance

Today the first Italian stage of Tour de Ski 2021 in the Nordic Arena in Dobbiaco took place. All the suitable conditions for an exciting race were given and have been complied. Today individual Free Style on 10 km distance women and 15 km men took place on the tough racing track “Nathalie”. Then finally 1:00 p.m. the women´s start. Everybody’s eyes beamed towards Jessica Diggins and Rosie Brennan, who have been dominating the Tour de Ski and the Worldcup so far. The duel of the two close friends ceased with Jessica Diggins´ victory with a head start of 14.9 seconds. Thus she could defend her yellow leader bib. Dobbiaco seems to be talismanic for American women, most notably for the 29 year old athlete from Minnesota, who already in 2016 and 2017 submitted victories and feels home on Dobbiaco´s racing tracks: “I love skiing in Dobbiaco, the snow was gorgeous, skis were well-prepared and the track was a pleasure. There hasn´t been so much snow ever since. Dobbiaco has been turned in a fairy-tale landscape. It´s amazing here!” Among Swedish women Ebba Andersson completed the podium with her 3rd place before the Russian Julia Stupak and the Finnish woman Krista Pärmakovski. The negative surprise of the day: After an initial convincing start, the Swedish woman Frida Karlsson achieved only the 9th place for she was impaired by a training-accident in the hotel. Excellent performances yielded by the Italian Anna Comarella and Lucia Scardoni, who in each case achieved ranks 12 and 14. Rank 30 was achieved by Ilaria Debertolis, 32 by Francesca Franchi, 33 by Martina Di Centa and 35 by Elisa Brochard.

Among men Russians dominated the first five places. Respectively 7 of 8 places were occupied by them. Also today Alexander Bolshunov was out of reach for everybody and achieved his 3rd victory on this Tour de Ski. Thus he underpinned his head start towards his direct pursuers: “I´m aware of having a strong leadership. I give my best at each start. This further victory motivates me a lot.” The second place was achieved by Denis Spitsov, who till the end was hoping for a victory, whereas the 3rd place was achieved by Ivan Yakimushkin with respectively gaps of 8.3 and 13.9 seconds. Rank 4 was achieved by Alexey Chervotkin, rank 5 by Artem Maltsev and rank 6 by the Frenchman Maurice Magnificat. Maltsev could defend his second place in the overall Tour ranking. Among the Italians Giandomenico Salvadori achieved rank 21, Francesco De Fabiani 22, Federico Pellegrino 25, Paolo Ventura 31, Davide Graz 35 und Mirco Bertolina 43.

The absence of the Norwegians, who cancelled their participation on the Tour the Ski, was officially caused by Covid. Also the Norwegian press was remarkably reduced and only the journalist of the NRK broadcast Morten Stenberg travelled from Scandinavia to Italy: “To NRK broadcast it´s important to reside for its enthusiastic ski cross-country spectators. In my opinion the Tour de Ski of this year is boring without Norwegians, however other athletes have the opportunity to show the world their sporting prowess. I think the absence of the Norwegians doesn´t really mean a problem. Here in Dobbiaco I feel safe because the safety-measures against COVID-19 are handled the same way as in Norway.” 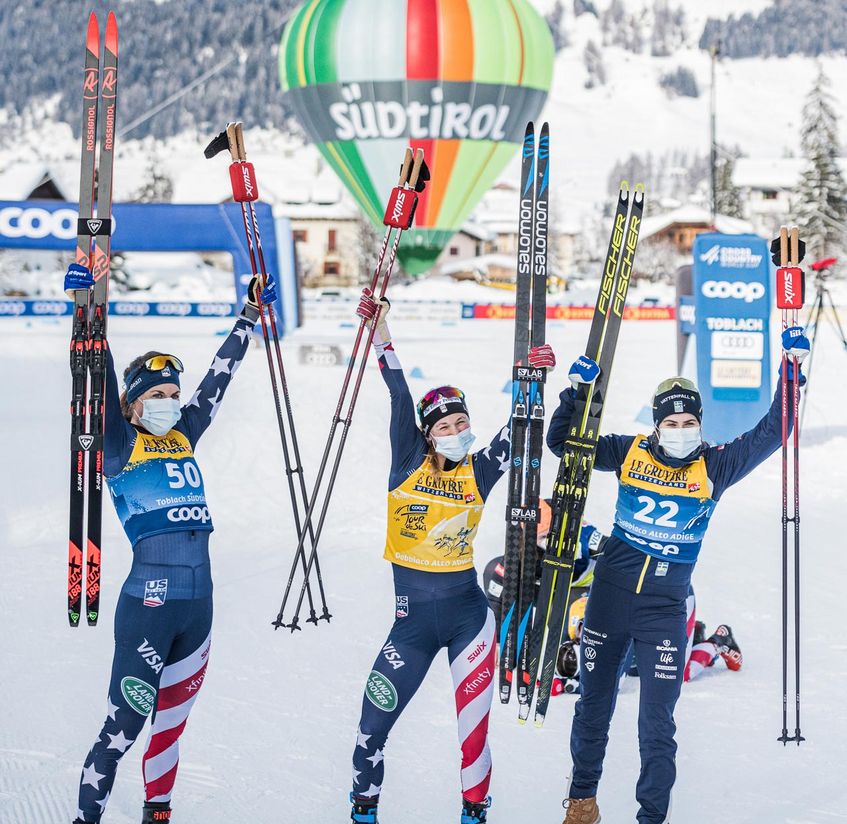